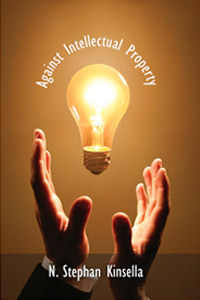 
Wealth maximization is not the goal of law; rather, the goal is justice—giving each man his due. Even if overall wealth is increased due to IP laws, it does not follow that this allegedly desirable result justifies the unethical violation of some individuals’ rights to use their own property as they see fit.


It is possible that companies would have an even greater incentive to innovate if they could not rely on a near twenty-year monopoly.


To ask whether a law should be enacted or exist is to ask: is it proper to use force against certain people in certain circumstances? ... pie growth does not justify the use of force against the otherwise legitimate property of others.


the fundamental social and ethical function of property rights is to prevent interpersonal conflict over scarce resources.


Property rights must be demonstrably just, as well as visible, because they cannot serve their function of preventing conflict unless they are acceptable as fair by those affected by the rules.


Bouckaert maintains that “only naturally scarce entities over which physical control is possible are candidates for” protection by real property rights. For ideal objects, the only protection possible is that achievable through personal rights, i.e., contract


First occupation, not creation or labor, is both necessary and sufficient for the homesteading of unowned scarce resources. ... Palmer correctly points out, “occupancy, not labor, is the act by which external things become property.” ... The problem with the natural rights defense of IP, then, lies in the argument that because an author-inventor “creates” some “thing,” he is “thus” entitled to own it. The argument begs the question by assuming that the ideal object is ownable in the first place; once this is granted, it seems natural that the “creator” of this piece of property is the natural and proper owner of it. However, ideal objects are not ownable.


Thus, because ideas are not scarce resources in the sense that physical conflict over their use is possible, they are not the proper subject of property rights designed to avoid such conflicts.


Just because a rule can be proposed does not mean that it is workable or just.


A contract, by contrast, binds only parties to the contract. It is like private law between the parties. It does not bind third parties, i.e., those not in “privity” with the original parties.


Palmer writes: The separation and retention of the right to copy from the bundle of rights that we call property is problematic. Could one reserve the right, for example, to remember something? Suppose that I wrote a book and offered it to you to read, but I had retained one right: the right to remember it. Would I be justified in taking you to court if I could prove that you had remembered the name of the lead character in the book?


Rothbard and others are sidetracked into the mistaken notion that ideas and labor can be owned. If we recognize that ideas cannot be owned (they are not scarce resources), that creation is neither necessary nor sufficient for ownership (first occupancy is), and that labor need not be “owned” in order to be a homesteader, then the trouble caused by these confused notions disappears.


We must not lose sight of this crucial libertarian point. If I own a 100-acres of land, I can prance around naked on it, not because the land is imbued with some “right-to-prance-naked,” but because I own the land and it does not (necessarily) violate the property rights of others for me to use my property in this fashion.


There is clearly no warrant for the view that reserved rights can somehow prohibit third parties from using knowledge they acquire.


It does not lose anything from its capacity to produce however often it is used; its productive power is inexhaustible; it is therefore not an economic good.


“A ’right’ is a moral principle defining and sanctioning a man’s freedom of action in a social context.”